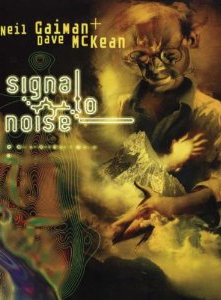 Besplatna isporuka za porudžbine iznad 2.000 dinara
Kako da kupim?
Signal to Noise does not entertain. It scratches, it provokes, it frightens. It tells you things you don't want to know but then twists you inside out by saying, look harder and see the poignance, the beauty of light dancing on life's edge, truth that is as simple and direct as death' Jonathan Carroll, from his introduction. Originally commissioned and serialised in The Face, the comic strip Signal to Noise was then expanded and revised for its launch on the VG Graphics list in 1992 with an introduction by Jonathan Caroll. It tells the story of a film director, somewhere in London, dying of cancer. His life's crowning achievement, his greatest film, would have told the story of a European village as the last hour of AD 999 approached - the midnight which the villagers were convinced would bring with it Armageddon. Now that story will never be told. But he still pointlessly works it out in his head, making a film that no one will ever see. No one but the reader.

The Tragical Comedy Or Comical Tragedy Of Mr Punch

Ocean At The End Of The Lane

The Ocean At The End Of The Lane

The Truth Is A Cave In The Black Mountains

Sleeper And The Spindle

The Truth Is A Cave