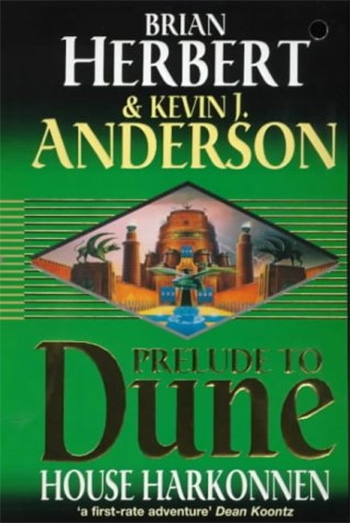 Besplatna isporuka za porudžbine iznad 2.000 dinara
Kako da kupim?
Don't even think about reading House Harkonnen without reading its predecessor Prelude to Dune: House Atreides; anyone who does so risks sinking in the sands between Frank Herbert's original Dune and this new prequel trilogy by Herbert's son, Brian, and Kevin J. Anderson. The purist argument that had Herbert wanted to go backwards he would have done so is, at least in part, negated by the sheer narrative verve, and by the fact that Anderson and Brian Herbert manage to pull some genuine surprises out of this long-running space-opera. House Harkonnen is a massive book, and there are places where it becomes plot heavy, but in following the story of Duke Leto Atreides and the conflicts with House Harkonnen, the authors succeed in spinning a gripping adventure while going off in some unexpected directions. Anderson, who has written many successful Star Wars novels, has noted his particular admiration for The Empire Strikes Back, and his desire to emulate that film's dark take on the genre. In House Harkonnen the conflict encompasses the tragedy of nuclear war, is marked by grief and horror, vengeance and torment, and all while the complex intrigues continue to unfold. Everything has its cost. We pay to create our future, we pay for the mistakes of the past. We pay for every change we make--and we pay just as dearly if we refuse to change. Ultimately this is the theme of a compelling game of consequences, choices and responsibility, a study of Leto's growth into power and the price of politics and love