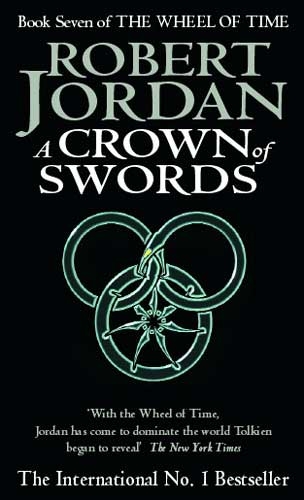 A CROWN OF SWORDS VOL. 7

Besplatna isporuka za porudžbine iznad 2.000 dinara
Kako da kupim?
The seventh book in Robert Jordan's internationally bestselling epic fantasy series, THE WHEEL OF TIME, now reissued with a stunning new cover design.The war for humanity’s survival has begun.Rand al’ Thor, the Dragon Reborn, has escaped the snares of the White Tower and the first of the rebel Aes Sedai have sworn to follow him. Attacked by the servants of the Dark, threatened by the invading Seanchan, Rand rallies his forces and brings battle to bear upon Illian, stronghold of Sammael the Forsaken …In the city of Ebou Dar, Elayne, Aviendha and Mat struggle to secure the ter’ angreal that can break the Dark One’s hold on the world’s weather - and an ancient bane moves to oppose them. In the town of Salidar, Egwene al’Vere gathers an army to reclaim Tar Valon and reunite the Aes Sedai …And in Shadar Logoth, city of darkness, a terrible power awakens …

WHEEL OF TIME 11: KNIFE OF DREAMS

CROSSROADS OF TWILIGHT - WHEEL OF TIME: 10

THE GATHERING STORM: The Wheel of Time: Book Twelve

A MEMORY OF LIGHT: Wheel of Time Book 14

EYE OF THE WORLD

THE FIRES OF HEAVEN

A CROWN OF SWORDS

THE PATH OF DAGGERS

THE WORLD OF ROBERT JORDAN'S WHEEL OF TIME

WHEEL OF TIME 4 THE SHADOW RAISING