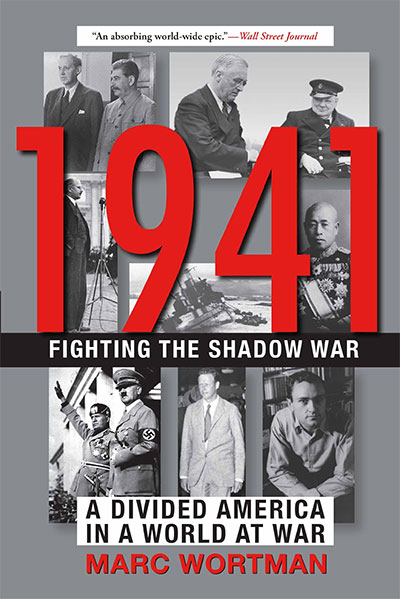 1941 Fighting The Shadow War: A Divided America In A World At War

Besplatna isporuka za porudžbine iznad 2.000 dinara
Kako da kupim?
In 1941: Fighting the Shadow War, A Divided America in a World at War, historian Marc Wortman thrillingly explores the little-known history of America's clandestine involvement in World War II before the attack on Pearl Harbor. Prior to that infamous day, America had long been involved in a shadow war. Winston Churchill, England's beleaguered new Prime Minister, pleaded with Franklin D. Roosevelt for help. FDR concocted ingenious ways to come to his aid, without breaking the Neutrality Acts. Launching Lend-Lease, conducting espionage at home and in South America to root out Nazi sympathizers, and waging undeclared war in the Atlantic, were just some of the tactics with which FDR battled Hitler in the shadows. FDR also had to contend with growing isolationism and anti-Semitism as he tried to influence public opinion. The largest obstacle was Charles Lindbergh and his America First Committee, with its following of hundreds of thousands. While Americans were sympathetic to those being crushed under Axis power, they were unwilling to enter a foreign war. Wortman looks at this dynamic time through the eyes of the powerful as well as ordinary citizens. The book opens with two American journalists who witness Hitler's invasion of Poland: William Shirer is appalled by the rise of Nazism, Philip Johnson is enthralled with Hitler. Their stories weave throughout the intricate tapestry of events that unfold during the crucial year of 1941. Combining military and political history, Wortman crafts an eye-opening account of how FDR took the country to war.