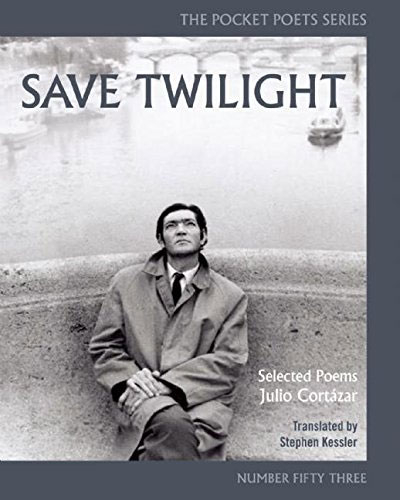 "Cortázar's verse is more traditional than his fiction, but his style and themes are in harmony across genres: eccentric, mystical, full of animals but deeply human. Cortázar is a people's poet, accessible from every angle, and his position as a titan of the Latin American boom is indisputable." - Publishers Weekly

"This new edition - small and irresistible, the kind you want to pocket and read out on the grass somewhere - is bilingual, with Spanish on the left page and English on the right, and Stephen Kessler does us the favor of retaining some of Cortázar's weird, wandering little essays, including "For Listening Through Headphones", his oblique study of poetic intimacy." - The New Yorker

World renowned as one of the masters of modern fiction, Julio Cortázar was also a prolific poet. While living in Paris during the last months of his life, Cortázar assembled his life's work in verse for publication, and Save Twilight selects the best of that volume, making his poems available in English for the very first time.

This expanded edition, with nearly one hundred new pages of poems, prose and illustrations, is a book to be savored by both the familiar reader and the newcomer to Cortázar work. Ranging from the intimate to the political, tenderness to anger, heartbreak to awe, in styles both traditionally formal and free, Cortázar the poet and subverter of genres is revealed as a versatile and passionate virtuoso. More than a collection of poems, this book is a playful and revealing self-portrait of a writer in love with language in all its forms.